KPPI JAKARTA 25 JANUARY 2018 : BELIEVE AND JESUS WILL HELP YOU

Thursday, 25 January 2018, was a bright day,  showing how good God is. It was when the first KPPI (Praise and Divine Healing Service) held for the first time in the year 2018.

Many came from all areas of the city. Young and old ones, they came with a hope to see God’s miracle for their lives.

Rev. Togu Hasiholan opened the service and led the congregations to praise and worship the Lord.

A healing testimony film was aired about a healing miracle that happened to a child, Kris, who suffered a painful headache for years. He suffered such an unbearable pain in his head. A miracle happened after he attended a healing service ministered by KPPI team in her village in Central Sulawesi Province. He was prayed there and all the pain had gone.

The second healing testimony was aired. A short sermon of last year service was aired first. It was shared that we should love God with all our heart, all our soul, all our mind and all our strength. He must be the number one in our life, more than anything and anyone on this earth.

A healing miracle story followed. It was about Horas Harahap, a 9 years old boy, who was healed from hydrocephalus that he suffered since he was a baby. He was stated to have only 20 life percent life expectancy and urgently needed to be operated. But his mother decided not to take him for a surgery and had faith in Jesus.  The mother brought Horas to be prayed in KPPI regularly from 2008 – 2013.

Rev. Jacob Sumbayak stepped forward to share the Word of God. The congregations were led to worship the Lord first. Jesus is God who is full of love and compassion.  What made Jesus willing to come to this world? His Word says that because He loves us so much He has given His Son to die for us so that anyone believes in Jesus he will receive eternal life.

The Word of God was taken from Luke 8:22-25  “Now it happened, on a certain day, that He got into a boat with His disciples. And He said to them, “Let us cross over to the other side of the lake.” And they launched out. But as they sailed He fell asleep. And a windstorm came down on the lake, and they were filling with water, and were in jeopardy.  And they came to Him and awoke Him, saying, “Master, Master, we are perishing!”  Then He arose and rebuked the wind and the raging of the water. And they ceased, and there was a calm. But He said to them, “Where is your faith?”  And they were afraid, and marveled, saying to one another, “Who can this be? For He commands even the winds and water, and they obey Him!”

It is a story of the disciples that were sailing in a boat with Jesus. Suddenly a great windstorm came down on the lake and all were in fear. At the same time, Jesus was asleep.   Jesus arose and rebuked the wind. The wind instantly ceased and calm. But Jesus also scolded them as they had no faith.

They all were amazed and asked one another, “Who is this man, who made the windstorm calm and they obey Him?”  This Man is Jesus, the Lord and Saviour.  The most important thing is trusting Him.

It is only by faith. When the disciples were in fear and panicky, Jesus still helped them. Often times the problems of life made us lost our faith. But Jesus, He is God, He is able to stop the storm that comes to our life. He only needs our faith.

Then an altar call was given to every one who is willing to believe. Many raised up their hands and stood up. They were led to pray to receive Jesus as their Lord and Savior .

All the congregations were led to worship the Lord.  Susan Sumbayak came forward.  She said that they who had received Jesus as their Lord and Savior had made the heaven rejoice.

Then she called everyone who had ear problems to come forward. Around 20 people came forward. They were all prayed. God did His great work.  An old man with a hearing problem was healed and he could hear clearly. A young woman who couldn’t hear from birth was touched by God and could hear for the first time in her life.

She called again for the second time anyone who suffered from heart sickness.  A woman with a leaky heart was prayed,  and after the doctor checked her condition, there were no signs of leaky heart or any problem in her heart. God had healed her.

All the counselors were called, at the same time all the sick people were called to move forward.

And after that, all the counselors prayed for the sick people one by one. God performed His miracles. Many were healed from: chronic gastritis for a year, vertigo, painful back spine, difficulty to scoop, kidney stone for 3 years, breathless and coughing up blood, painful headache like being stabbed for 6 months, abnormal heart valve, stomach problem for 1 year, deafness on both ears, gout on right hand for 1 week, painful waist and breathless lung for 3 months, hearing problem for 1 year, hearing problem for 8 years, broken back spine, and a young man who was healed from Guillain Barre Syndrome, a sickness that caused sudden paralyse since November 2017, he came using a wheelchair and after he was prayed he already walked. Our God is so great.

Another altar call was given for anyone who desired to serve the Lord. They who raised up their hands came forward and were prayed.

The service ended with a message for every one to return back to his local church and be a blessing there. This service was an interdenominational ministry and held by GPPI Pondok Daud Jakarta. 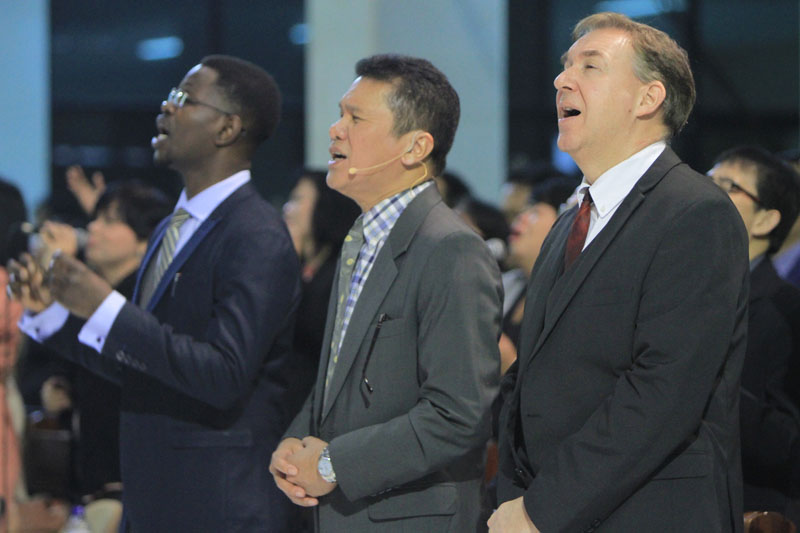