KPPI JAKARTA 22 FEBRUARY 2018: Called to Serve The Lord Is a Great Miracle

On Thursday,  22 February 2018,  again God revealed His love and power in KPPI (Praise and Divine Healing Service), that was held in Auditorium of Adventist Building,  Jl. MT Haryono, Kav. 4-5, Tebet, Pancoran, South Jakarta. A bright weather along the day was the proof that God had heard all prayers all along the week.

KPPI that has been held since 1993 always preached the great love of Jesus who has died on the Cross for our sin’s redemption and gave hope and the answer for the life of man. His redemption also brings healing miracle and way out of every problem.

This healing service was also aired online,  a live streaming program that can be accessed on Facebook and Youtube.

Praising and worshiping was lifted up whole-heartedly all through the service.

A healing testimony film about a lady from Papua, Martince, was aired. This lady suffered a severe pain chest, it was like being stabbed in her chest for a year. God healed her when she was prayed in KPPI Jakarta.

The congregations then read the verses from Mark 5:28-29 with a loud voice as a confession of their faith.

The second healing testimony film was about Irma Fitriani Tambunan, a lady who was healed from acute gastritis for one year. She suffered so terribly because of her sickness. She found the information about KPPI in Facebook and the team of KPPI prayed for her on the phone, and finally, she attended the service on February 8, 2018. God touched and healed her after she was prayed there. God is so great.

Jesus Did His Miracle in front of You

Rev. Jacob Sumbayak led the opening prayer before delivering the Word of God. All the congregations were led to cry out to God personally and wholeheartedly for their petitions. To make God His only hope and there would be nothing else. He is not so far across the sea but He is near. He is just as near as our prayer.  Cry out to the Lord and ask His help, ask anything that you need. Put your hope in the Lord God who created this heaven and earth.

“and saw two boats standing by the lake; but the fishermen had gone from them and were washing their nets. Then He got into one of the boats, which was Simon’s, and asked him to put out a little from the land. And He sat down and taught the multitudes from the boat. When He had stopped speaking, He said to Simon, “Launch out into the deep and let down your nets for a catch.” But Simon answered and said to Him, “Master, we have toiled all night and caught nothing; nevertheless at Your word I will let down the net.”  And when they had done this, they caught a great number of fish, and their net was breaking. So they signaled to their partners in the other boat to come and help them. And they came and filled both the boats, so that they began to sink.  When Simon Peter saw it, he fell down at Jesus’ knees, saying, “Depart from me, for I am a sinful man, O Lord!” For he and all who were with him were astonished at the catch of fish which they had taken; and so also were James and John, the sons of Zebedee, who were partners with Simon. And Jesus said to Simon, “Do not be afraid. From now on you will catch men.” So when they had brought their boats to land, they forsook all and followed Him.

It was noonday and was not the right time to catch fish. But Jesus said to Simon to let down his net. Simon obeyed even though it was not logical. Then Simon let down the net and they caught a great number of fish. The fish filled both the boats until they began to sink. Jesus did the miracle in front of many people.

Called To Be The Fisher of Men

He started to realize how great is the presence of Jesus and made him so unworthy. He began to realize who he was and said, “ Lord, depart from me, for I am a sinful man.”

And Jesus answered, “Do not be afraid. From now on you will catch men.” Simon Peter was called to be the fisher of men. This was a great miracle, more than any miracles that happened.

A call was given to anyone who decided to believe Jesus with his whole heart. All who raised up their hands were led to pray receiving Jesus as their personal Lord and Saviour.

Put Your Whole Faith in God

Rev. Daniel Judah Sumbayak  stepped forward and shared that all should put their whole faith in Jesus because the Word of God wrote, “By His stripes we are healed.” Let us see that God is good and wanted to heal us.

When we believe in the name of Jesus, that by His stripes we are healed, then we will receive healing. Lord Jesus really wants to heal us but we have to believe, have faith and give all our worries to Him. He is a very good God, He has thep ower that is boundless. If we believe we will receive healing. Tonight we will go home not with our sicknesses but with healing that God gave. Don’t look at our sickness and think how difficult to get healed, but look at Jesus who has great power. Welcome Him our Lord!

God answered all the prayers that were lifted. Various healing miracles took place. They were healed from bending leg problem, gastritis for 6 months, lung infection, knee pain for 6 months, stiff neck and unable to move for 3 years, gout for 2 years that caused unable to squat, lung pain and heart problem, pain on the back and legs indicated as HNP for 10 years, aching pain in legs for 4 months, kidney sickness and gastritis for 20 years, a boy who has problem with his eyes from birth by letting out teardrops every minute like crying, back pain, heart sickness and already operated to put ring and caused easily get tired for 1 year, pain on the leg, hands and waist caused by falling, waist problem for 3 years.

A call was also given to anybody who had the desire to serve the Lord. They who responded and raised their hands moved forward to be prayed.

The service was ended with a message that everyone who came should return back to his local church to serve and be a blessing there. KPPI was conducted by GPPI Pondok Daud Jakarta as an interdenominational ministry since 1993.

Previous Article
KPPI JAKARTA 8 FEBRUARY 2018: IT IS SO TRUE TO HAVE FAITH IN JESUS
Next Article
Sunday Service, April 1, 2018 : Rev. Yohanes, Be Ready To Be Used By God 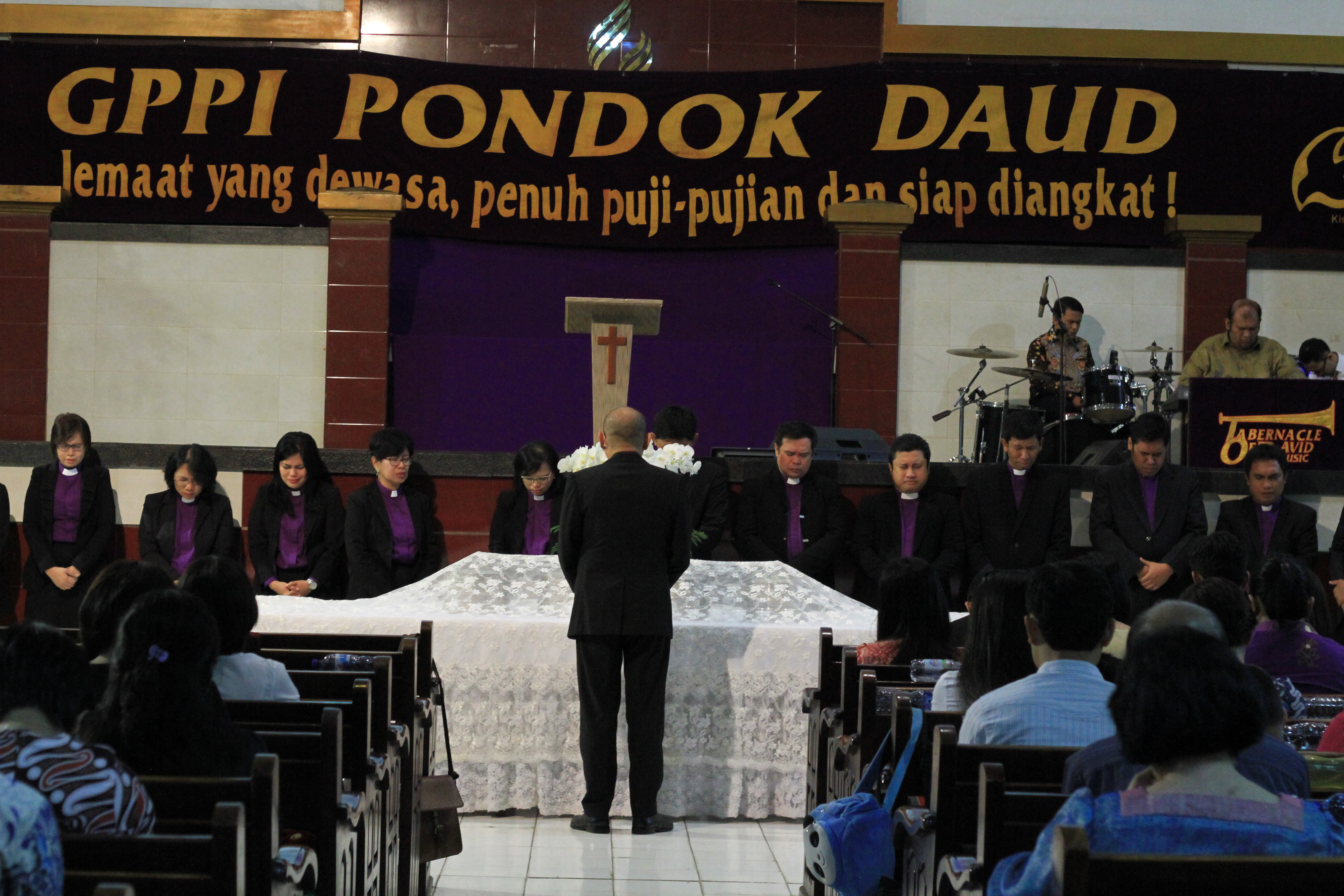