It was a touching view. The sick people were entering the auditorium where KPPI (Praise and Divine Healing Service) was held on Thursday, September 19, 2019, in Adventist Building, Jl. MT Haryono, Kav 4-5, Tebet, Pancoran, South Jakarta.

A lady in a wheelchair was entering the room. Others in their wheelchair were also entering the room. A man wearing a neck supporter came; he not only suffered from his sickness but also represented his 5 months old daughter who was treated in ICU caused by cancer. There were many more who came with various kinds of sicknesses. They came with the hope to receive God’s miracles.

This service was also aired through a Live Streaming Program on Facebook. There were small groups who gathered to watch this program in some cities in Indonesia.

A short film about 25 years of ministry of KPPI that was first held in 1993 was aired.  God never changed and always showed His power.

The films of healing testimonies that happened in KPPI were also aired to strengthen the faith of the congregations. A man suffered from severely infected skin for 17 years was healed; a lady who had waist pain for 8 years that caused her difficult to sit or lie down got healed; a man who suffered from the deaf left ear and painful stomach for 10 months that caused him unable to go to work was healed.  Our God is God who makes miracles.

The service was full of worshiping and praising to the good God who always hears our prayers.

Jesus, the Son of the Living God

The servant of God, Rev. Ruben Ferlianto stepped forward and shared the Word of God from Matthew 8:24-27 (NIV)  “Then he got into the boat and his disciples followed him.  Suddenly a furious storm came up on the lake, so that the waves swept over the boat. But Jesus was sleeping. The disciples went and woke him, saying, “Lord, save us! We’re going to drown!”  He replied, “You of little faith, why are you so afraid?” Then he got up and rebuked the winds and the waves, and it was completely calm. The men were amazed and asked, “What kind of man is this? Even the winds and the waves obey him!”

The verse was about Jesus calming the storm. Two thousand years ago there was a man who was really able to calm down the furious storm. What kind of Man is He? In another moment, the disciples were on their way and suddenly came a great storm and they almost drowned. At the moment, Jesus was walking on the water to approach them. In another incident, Jesus walked and overcome the gravity law. No one can go over the gravity law but Jesus has the power to overcome it. In another moment, Jesus changed the water into the wine at a wedding party. What kind of Man is He?

One time a man named Lazarus was already 4 days dead, and Jesus shouted,  “Lazarus, come out!” What kind of Man is this, that is able to bring the dead man alive? He is the Son of God and His name is Jesus Christ.  He is not just an ordinary man. He is not just a prophet. He is God who made heaven and earth, the ocean and all the living creatures in it and had come down to earth. He is able because He is God who came down to become a human being.

All congregations repented from their sins and believe fully in the redemption of Jesus Christ as they prayed to receive Jesus in their hearts.  They all stood up and worshiping the Lord.

The preaching of the Word of God continued by Rev. Joseph Batubara, taken from Mark 5:24-29 (NIV) “So Jesus went with him. A large crowd followed and pressed around him.  And a woman was there who had been subject to bleeding for twelve years. She had suffered a great deal under the care of many doctors and had spent all she had, yet instead of getting better she grew worse. When she heard about Jesus, she came up behind him in the crowd and touched his cloak, because she thought, “If I just touch his clothes, I will be healed.” Immediately her bleeding stopped and she felt in her body that she was freed from her suffering.”

It is about a woman suffered from bleeding for twelve years. She was in great suffering. But she had the courage to approach Jesus and she was alone. She had suffered so greatly but she didn’t give up.  She had heard about Jesus who healed the lepers, the limp and brought the dead to live.

God knows every struggle we had, just like the woman suffered from bleeding and tried hard to get near and met Jesus to touch His clothes. She knew it was not easy to break through the great crowd but she had decided to get near to Jesus. Don’t ever give up because we have Jesus. He is the same Jesus who can bring the dead man to live.

During the healing prayer, every sick person was called to step forward to pray with all their heart to the Lord to get healing miracles. The healing prayer was led by Rev. Joseph Batubara, Rev. Phillipus Suwandi, and Rev. Yohanes Nugroho. And then all the sick people were prayed by the counsellors of KPPI.

Healing also happened to them who watched the service through a Live Streaming Program. A lady in Cikampek, West Java, got healed from gastritis for 2 years. A man in Humbahas, North Sumatera, was healed from breathless for 6 months.

The service was ended with a message that everyone should return back to their own local church to serve the Lord there diligently.

KPPI (Praise and Divine Healing Service) is an interdenominational ministry that has been held since 1993 by GPPI Pondok Daud Jakarta. 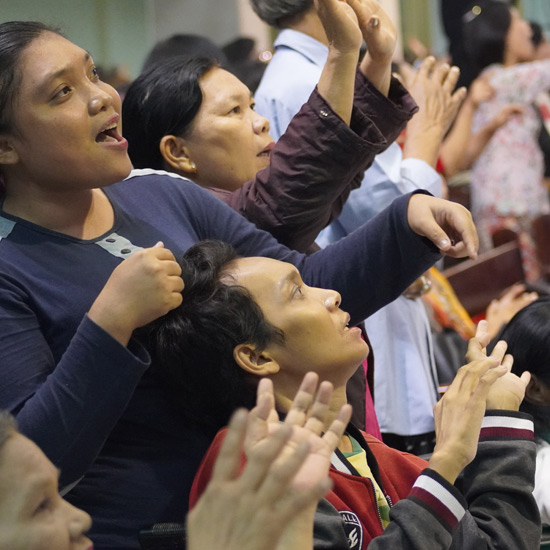